“The Vendée Globe is a challenge, I will take your “Merci” with me.”

New boat, new Vendée Globe, new challenge : Sebastien Destremau confirms his participation at the helm of a boat that is called « merci ».

St Malo, June 8th, 2020 – After having crossed the oceans and tackled multiple adventures single-handed on faceOcean, Sebastien Destremau will be setting sail aboard his new boat, heralding like a flag on his mainsail the word “MERCI”.

“For the next Vendée Globe, my boat is called “MERCI” (thank you) and carries the notion of gratitude in order to strengthen the bonds between men around the world. It supports this intimate, professional or planetary message, from thank you mother to thank you earth. I want to give spirit and heart to this non-stop, solo and unassisted adventure.” Says Sebastien Destremau.

Upon his arrival in the Sables d’Olonne, on March 11th, 2017, after sailing 124 days alone, Sébastien end his speech with an emotional “Merci”, addressed to the thousands of people who welcomed him and enthusiasts who followed and supported him during the race. “I have never forgotten that moment, and I decided to participate to the Vendée Globe 2020 by saying MERCI.” He adds.

On June 8th, 2020, for World Ocean’s Day, Sebastien recalls his ecological engagement. “The sine qua non condition for my Vendée Globe participation is my project to be carbon neutral.”

And the skipper to conclude…“What if we started by saying thank you to the planet?”

It’s exhilarating, complicated and terrifying. I can’t wait but sometimes I wonder why am doing this. It’s kind of like going to the dentist for a root canal. You don’t really look forward to it but once it’s done, it’s the best feeling in the world.

There is a physical element, but really it comes down to rigging the boat in the best way possible. I learned so much from the last race that I will try not to make the same mistakes again. But I know I’ll make different ones.

There are so many it is hard to select one. Probably the hardest one was when I capsized and broke my ribs in darkness. I was in the middle of nowhere near the Kerguelen’s Islands. That was a bit scary, to say the least.

Again, there are so many. Being alone in the middle of the sea like the Nemo Point is an indescribable feeling; solitude, power, solace. But my arrival at the Sables d’Olonne – the last skipper in – was amazing. I thought everyone would have gone home but there they were, cheering and clapping by thousands. I was awed by the emotions that welcome brought out.

In regard to the boat, everything is really important. Tools, a lot of spares and sewing kits to repair any damages. We also carry a very comprehensive first aid kit (I cut my finger badly last time), food supplies, satellite phone, safety gears, … the list is endless.

On a personal note, I won’t take anything with me. No film, no music, no books, no nothing. I generally don’t need much and I do want to enjoy the journey for what it will offers however sometimes I wish I could have a picture or two of my love ones to look at.

Every part of this race is difficult! From pirate ships to whales to storms. The most grueling one is “being alone out there” – The Vendée Globe is the most challenging test anyone could ever put himself or herself through.

Well it depends on how much help and financing you have. How much experience and what is your goal. Some take some months, others take years. Last time it took me four years. This time it is much shorter for us. Psychologically, it takes a lifetime.

Last time I had no idea what to expect and I wanted to see if I was capable of doing it. This time around, I know what I am going to face and … I want to know if I am capable of doing it! For me that’s a completely different level of challenge. Much, much harder I’d say. So, let’s see if I can do it!

Don’t do it! Naaaa am joking.

Go for it. Live up to your dreams. Aim high. You only have one life, live it to the max. Otherwise would be the point?

Haha. Yes, no doubt. But, knowing me, I will most probably forget something else.

Saying MERCI is an essential word that creates a bond,

Saying MERCI strengthens the ties around a unifying project,

Saying MERCI is moving forward together in a common adventure,

Saying MERCI unites the giver with the receiver,

Saying MERCI is the recognition of the value of the other person,

Saying MERCI is a sharing that surfs on success,

Saying MERCI crosses the course in a sea that might be rough sometimes,

Saying MERCI is an act of welcome that soothes the existence.

Sébastien Destremau is a Franco-Australian skipper and sailor who, in 1998, took home the Sydney-Hobart, considered a highly difficult race. In 2012, he took the decision to take on an even bigger challenge: ne part of the 2016 Vendée Globe, the most formidable single-handed race around the world. Despite technical damages, a lack of food and even cracked ribs, he was welcomed as a hero in Sables d’Olonne upon achieving his goal after a journey of 124 days. A five-time world champion, he also prepared the 1992 Olympic Games for France, participated in five America’s Coup campaigns, reached the 12th place in the world’s skippers’ ranking, and more recently finished second in the Route du Rhum in 2018. 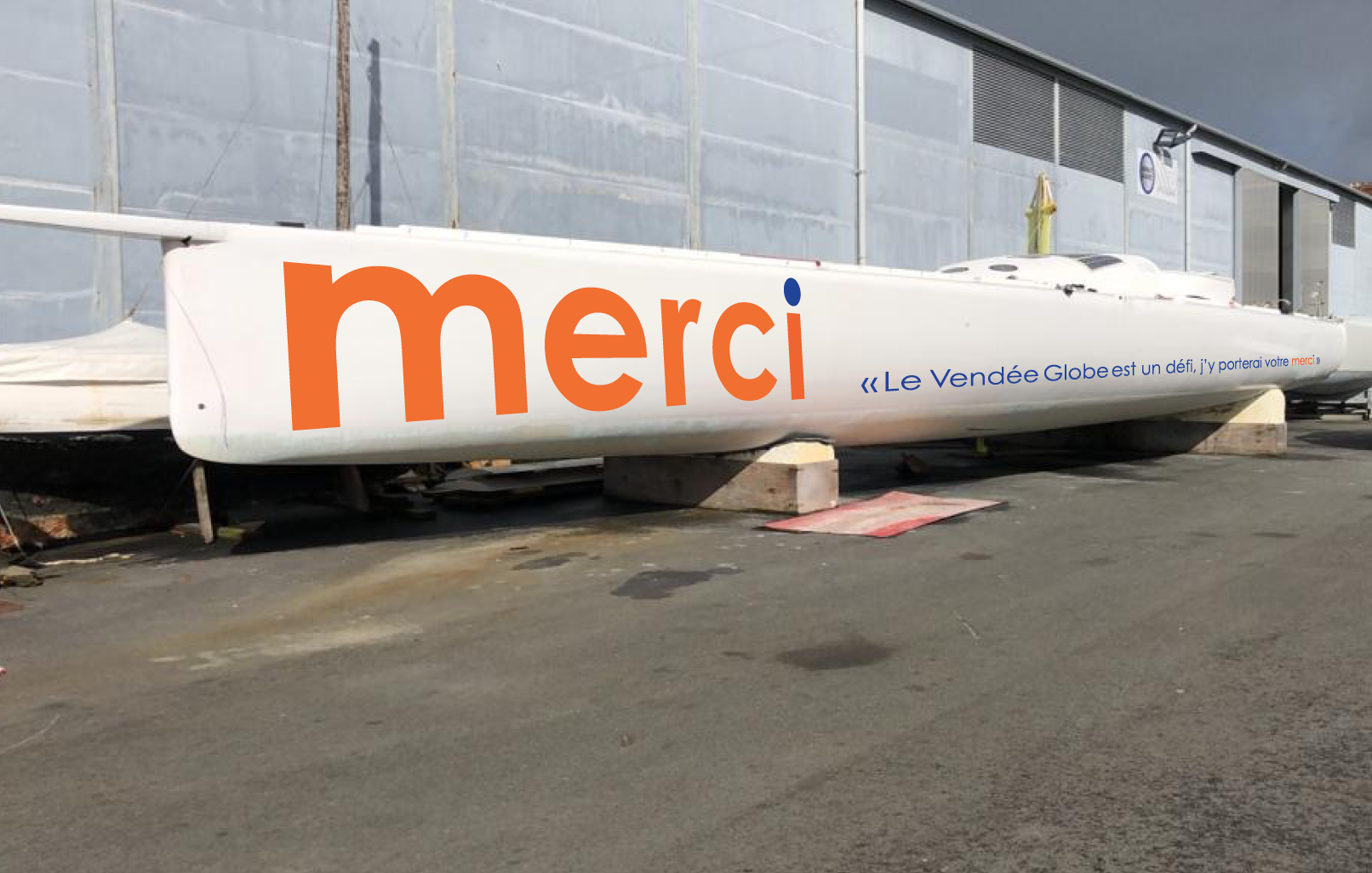